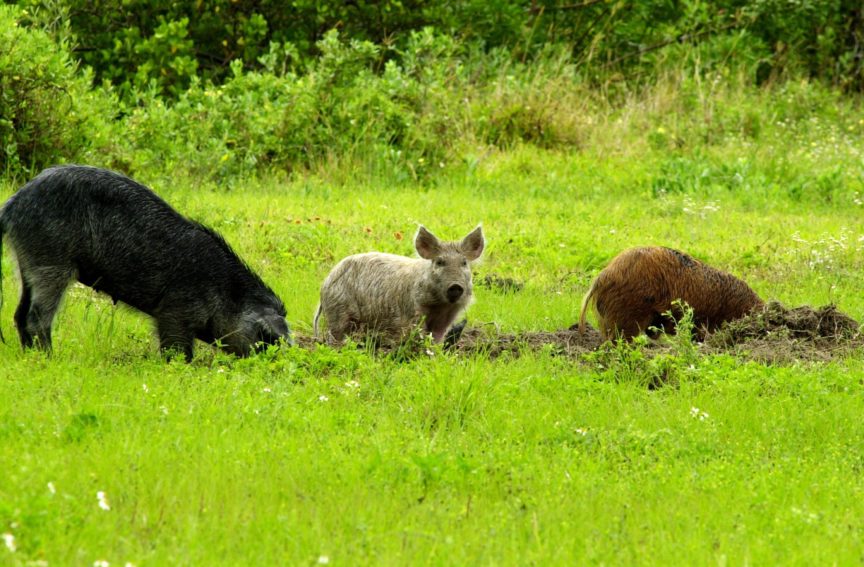 Invasive feral swine have been called the “rototillers” of nature. Their longs snouts and tusks allow them to rip and root their way across America in search of food. Unfortunately, the path they leave behind impacts ranchers, farmers, land managers, conservationists, and suburbanites alike. Photo courtesy NASA.

Earlier this year, the EPA registered the warfarin-based Kaput Feral Hog Bait as a general use pesticide. Its label requirements include specific feeder designs to restrict access by non-target wildlife and disposal by burial of exposed carcasses. Last month, the Texas Department of Agriculture (TDA) adopted emergency rules classifying the toxicant as a State-Limited-Use pesticide which would allow for its use by anyone holding or under the supervision of a Pesticide Applicator’s License.

These decisions came as a surprise and raised many concerns among the conservation, natural resource, and hunting communities. Chief among these concerns are how the product might affect non-target wildlife, secondary exposure by scavengers, and the potential for unintended human consumption of exposed hogs. Still, many other questions exist and the plain truth is that only a few answers have been provided.

Warfarin is an anti-coagulant agent commonly used in rat poisons. Although it can have therapeutic benefits for humans, regular doses for hogs are cumulative and lead to internal bleeding and eventual death.

Feral hogs cause an estimated $52M in damage to farm and ranchlands across Texas each year and additional untold damage to wildlife and sensitive habitats. Clearly we need effective and efficient tools to control this non-native pest but, as we explore our options, we must understand the consequences. Toxicants may very well be an important tool in the abatement of hogs, what we have to decide is what level of risk to wildlife, livestock, and humans is acceptable.

Fortunately, we have some time to better understand this product. The makers of Kaput Feral Hog Bait do not expect to have the product available before May. Additionally, a restraining order has been issued by a Texas judge preventing the use of this product – in part because TDA had not followed the Texas Administrative Procedures Act in allowing a public comment period in consideration of rules changes. And finally, Senate Bill 1454, just introduced, will (if passed) require publicly available research results before allowing the use of a feral hog toxicant in Texas.