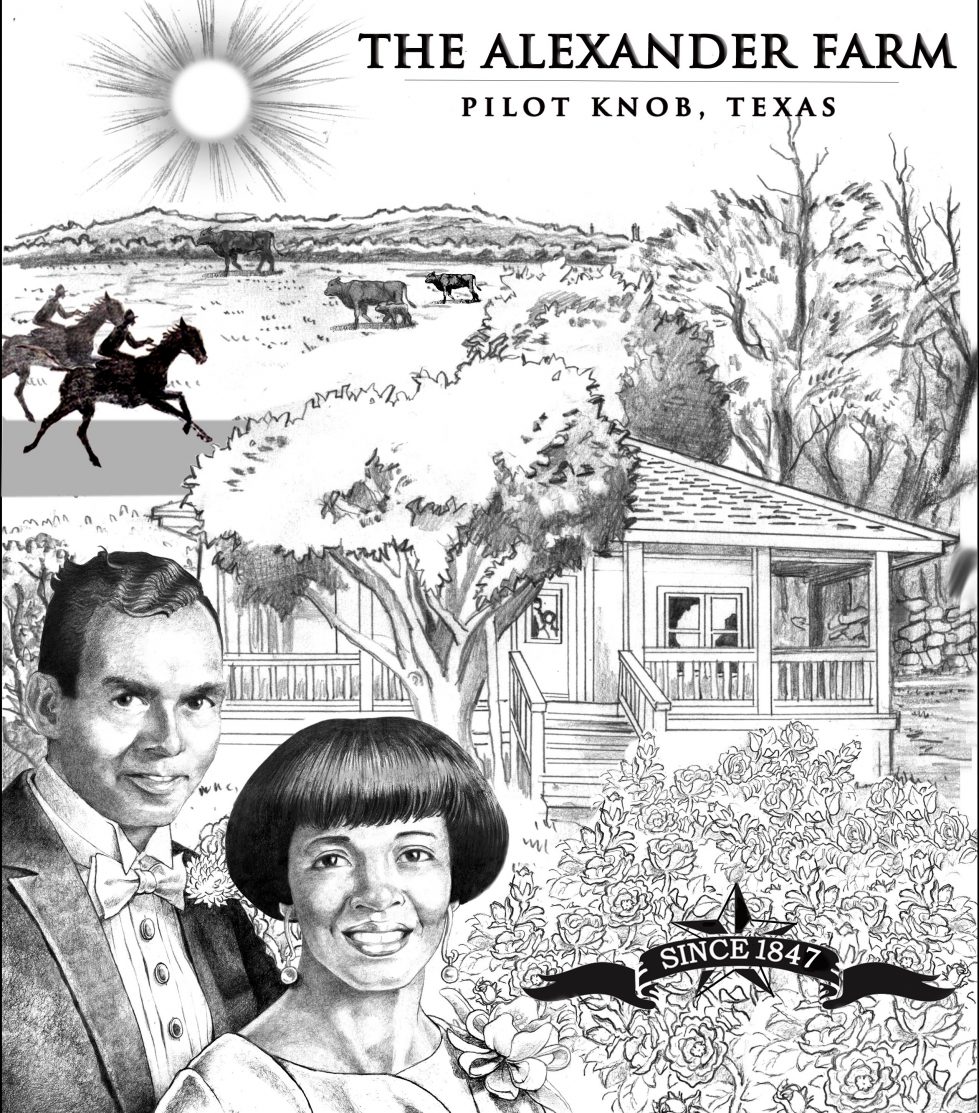 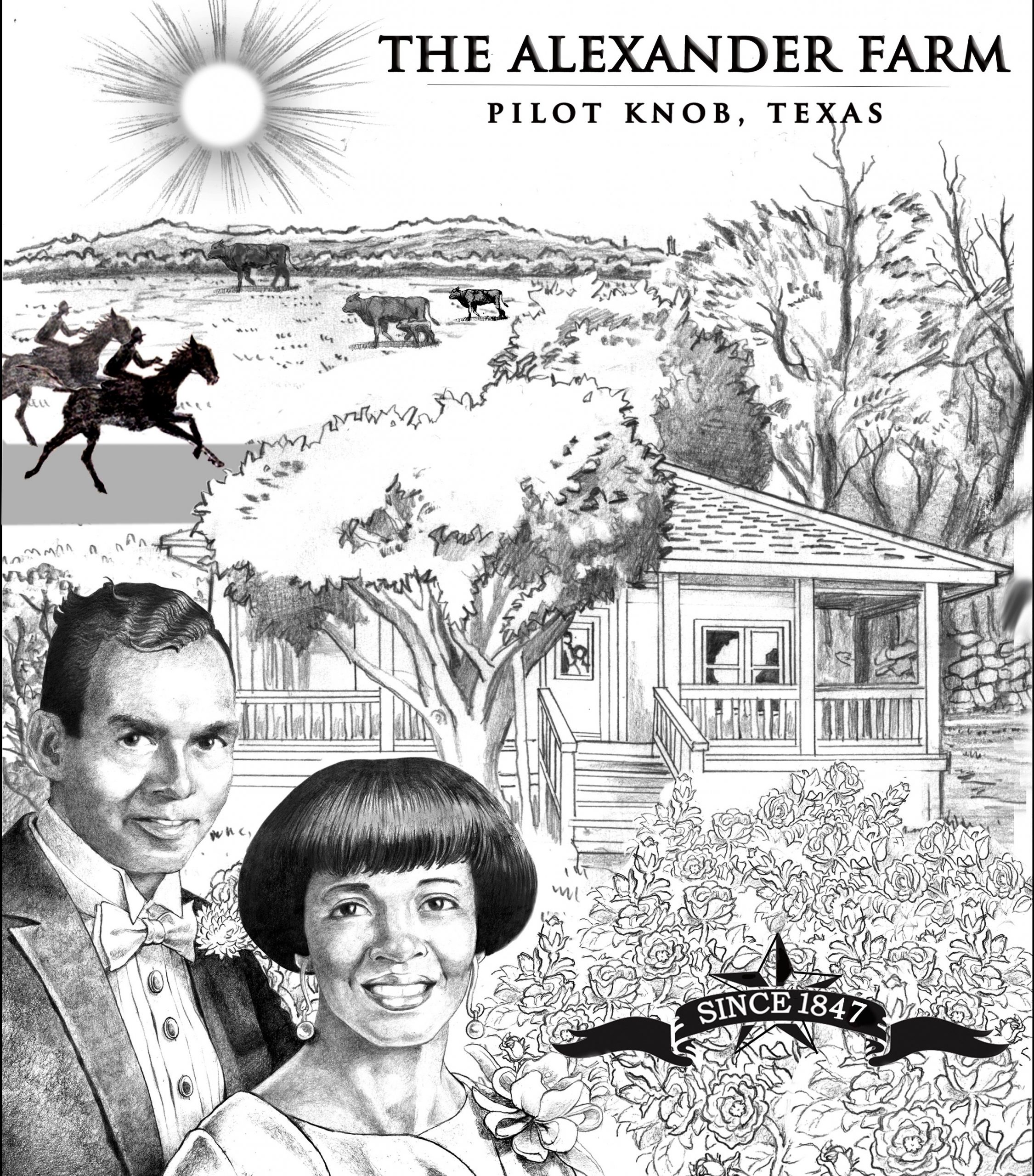 5th-generation descendant Marcellus Winston Alexander, Sr. and Juanita Rosie Smith-Alexander lived and loved as man and wife for 66 years on THE ALEXANDER FARM. Their children now own and operate the farm in its 175th year. Illustration credit: Richard Haselrig, Jr.

Daniel Alexander (1810-1883), our once-enslaved Great-Great-Grandfather, bred and trained Thoroughbreds and Quarter Horses at McKinney Falls—just outside Austin. Our land sits in the shadow of Texas’ only 83-million-year-old subterranean volcano christened Pilot Knob because it resembles a knob—if not a door—from the air.

According to family history, as a child, Daniel Alexander handled America’s first great race horse, Sir Archy. Alexander came of age in Galveston working with Copper Bottom, Sam Houston’s prized Quarter Horse who is a Foundation stallion of the breed and also a descendant of Sir Archy. A few years ago, the agile, strong and prolific American Quarter Horse line that Copper Bottom sired and Great-Great-Grandfather bred and trained was designated the state horse of Texas.

Today, Great-Great-Grandfather Daniel Alexander is featured along with 40 other Black Texans in “Black Cowboys: An American Story” at the Witte Museum in San Antonio. In the 1800’s, one in four cowboys were Black, and Copper Bottom’s descendants became the preferred horses of Texas cowboys. From all historical accounts, Daniel Alexander was a gifted, respected, favored, successful “race horse man,” the term Black professionals in the nascent industry preferred to call themselves.  He was a trainer of trainers for the Kentucky Derby, and Great-Great-Grandfather intuitively worked with the mirror neurons in horses that allow them to tap into humanity’s core. His homestead—THE ALEXANDER FARM land—has been stewarded by Alexander and his descendants for 175 years and counting.

Our brothers Mark and Gerald mostly raise beef cattle on the land today, but in decades past, the Alexander family’s farm at Pilot Knob, has been home to horse stables and training tracks, a thriving dairy business servicing six Central Texas distributors, food crops, and hundreds of cattle, hogs, and farm livestock.

We’ve persevered through extremes. Yet throughout our history we’ve also protected the health and well-being of our neighbors as well as ourselves. In fact, according to thousands of newspaper and county clerk records, Blacks who sought to free themselves from slavery in antebellum Travis County did so by riding away on horseback, rather than seeking their freedom on foot.

By design, Great-Great Grandfather Daniel Alexander’s equine prowess helped build Travis County’s horse-centric culture. Here, Black people on horseback were more the norm than the exception in large part because Alexander spent his life teaching enslaved people to ride and care for their mounts. Thus every facet of his legacy once identified enriches the history of our community. His life’s work and that of his family lift up freedom’s power as an equally deserved human right at every historic turn. 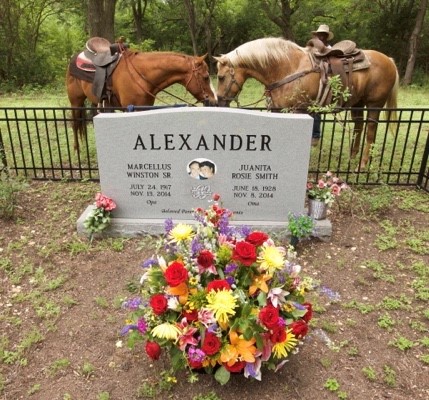 The gated Alexander Cemetery has always been part of the family farm. Daniel Alexander rests here as do dozens of his descendants. Photo credit: Alan Pogue, DocumentaryPhotographs.com

Despite Great-Great-Grandfather’s equestrian expertise, fame, and the contributions of his descendants, our family has been deemed non-existent as Black farmers by Texas’ Governors and federal agencies alike. We are still challenged by illicit, systemically racist taking from the public and private sectors that literally surround our farm. After our parents passed on five days apart in 2014, we as their children agreed that building and protecting the family farm legacy was what they wanted and expected us to do.

It took us a while to figure out what that meant for each of us who had grown up experiencing such idyllic, agrarian childhoods on THE ALEXANDER FARM of the 1960 and ‘70s. I still remember carrying a pitcher of fresh, raw, ice-cold milk from the dairy barn every morning for the family’s cereal. I was 7. My brothers woke at the crack of dawn to help my grandfather and father fill the milk vats before returning home to bathe, change and catch the bus to school.

For my brothers, conserving the land legacy meant redefining, re-fencing and re-imagining the farm now and into the coming decades. For me, protecting my parents’ legacy meant discovering as many ancestor needles in history’s haystacks as I could find. Buoyed by the wealth of support I got for the asking from historians nationwide, it became clear that my truest tack was helping people understand why protection and preservation of our historic legacy is a community, state, and national imperative—not simply the sentimental wish of one descendant.

Enter Frank Davis of Hill Country Conservancy. He’d read of Great-Great-Grandfather Daniel Alexander in Michelle Mears’ seminal work on 19th-century Black Travis County, And Grace Will Lead Me Home. Frank called to see how the Conservancy could help us celebrate and keep our farmland legacy. We talked about how our historic Alexander Cemetery flooded for the first time in known history after developers moved in behind us and re-routed the drainage of Cottonmouth Creek. Frank and our family members talked about the weaponized tax base that often consumed farm profits before they could be counted. We decided that as a family, we were likely better off keeping farm oversight in the family. Together with HCC, we found the best way to thrive at this juncture in our history was to restore farming as our core competency and continue to protect our legacy.

When we learned that TxDOT had not fulfilled their promise of identifying an alternate route for US-183’s expansion that didn’t harm our farm, we felt cheated yet again. Once we also realized that the developers surrounding us had encroached upon and taken our heir’s property that had been part of Great-Great-Grandfather’s homestead while enslaved, we knew we were being squeezed and had better strengthen our already-lifted shields. Frank Davis introduced us to his colleagues at Plateau Wildlife and Land Management. HCC and Plateau’s guidance helped us regain our agricultural land valuations and restored a bit of hope with a timely win for our family. 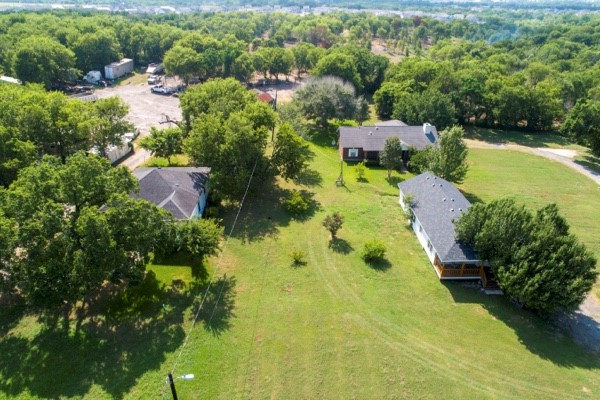 An aerial view of THE ALEXANDER FARM homestead, July 2021.

Partnering with the USDA in new farming programs, as did our grandfather, is yet another assist Frank suggested, and that we’re pursuing as THE ALEXANDER FARM’s descendants. The obstacles are there, but so is our history and the family identity that’s tied to our land’s 175-year legacy of place. Evidence-based farm practices that promote carbon sequestration in the soil through livestock grazing, enhancing cattle diets with nutrient-rich plant supplements, and maintaining good soil and water management, have never NOT been part of the plan at THE ALEXANDER FARM. Community farming demonstrations were offered at the farm by our Grandfather at the start of WWII and continued for decades. Our ancestors were named in the first Juneteenth commemorations at the state capitol, and Daniel’s descendants helped found  Huston-Tillotson University in Austin. In the spirit of those Alexander traditions, we plan to teach BIPOC youth the value of animal husbandry and planting cycles as prescient tools for community survival as Climate Change transforms the world we knew into the world we must grow.

Toward those tomorrows, THE ALEXANDER FARM family will join the Wilcox Ranch heirs of Seguin for a roundtable discussion that looks back—Sankofa-style—at Black farming and ranching as we chart the last quarter of our second century. We’ll gather at the Witte Museum near the Riverwalk at Brackenridge Park in San Antonio on Monday, March 28, 2022, from 6:30 to 9:00 p.m. for “Black Cowboys:  A Conversation in Restored Legacies.” The moderated discussion is free to the public and is timed to coincide with the final weeks of the Black Cowboys exhibit before its anticipated tour of the nation’s Smithsonian-affiliated museums. We hope you’ll join us there.

“Oh Ceny’s son
The mares and foals are neighing
From oak to oak and down the creekside bend
The crowds applaud while manes and hooves are flying
You ride astride to claim champions start to end
What’s a cowhand without a horse on Texas hillsides?
Or Black men without steeds’ freedom shared?
We toil here in summer through autumn’s falling
Oh Ceny’s Son, oh Ceny’s son, your land abounds
Oh Ceny’s Son, oh Ceny’s son, your love abounds.”

6th-generation descendant Rosalind “Roz” Alexander-Kasparik was born and raised on THE ALEXANDER FARM with an equal number of brothers and sisters, parents and grandparents. The farm is her forever home. Her family nickname is “Rosie,” after her mother’s middle name and life-long love of red roses. (Rosalind got shortened to Roz at Del Valle High School.) She is a National Merit scholar who was mentored as a teen by early Austin historian Ada Deblanc Simond. Roz earned her bachelors degree at UT Austin and her MA at Howard University in Washington, DC. She has made her living as an educator, researcher, journalist, designer, and cultural creative. She is the widow of two loving, peerlessly beautiful souls. She works daily, demanding respect for her family’s ancestral legacy and holding to account any and all who would diminish, encroach upon, or take from THE ALEXANDER FARM’s 175-year family heritage.