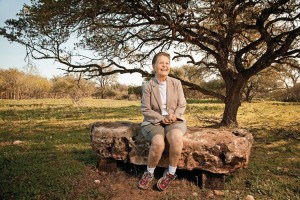 It seems that each year, we lose one of the heroes of Texas land conservation, and 2014 was no exception. In addition to the loss of R.B. Wilson of Flying Horseshoe Ranch, we were saddened to hear of the sudden loss of Mrs. Gay Ruby Dahlstrom.

Together with her mother, father and older brother, Cecil Ruby, Jr., Gay Dahlstrom (born Eloise Gay Ruby) first began her life on the properties now known as Dahlstrom Ranch and Ruby Ranch in 1937. Gay and her future husband Jack Dahlstrom were elected as King and Queen of the Prom at Buda High School, after which she went on to attend the University of Texas until she and Jack married. The early years of their marriage sent them all over Texas, moving more than forty times in ten years, followed by a long tenure in Dallas. However, the family land still called to them, and they eventually retired and resumed ranching on the Dahlstrom Ranch. Since then, Gay, Jack Sr., and their son and three daughters as well as Gay’s grandchildren, have dedicated much of their lives and resources to caring for their family’s land and its water and wildlife.

Initial discussions with Hill Country Conservancy about keeping the land intact began in 2007, after much family discussion and with Jack Sr.’s health dwindling. HCC was hosted at the ranch, and immediately upon stepping foot on it for the first time, HCC staff was astounded by its sensitivity, uniqueness and obvious importance for our region’s supply of plentiful, clean water. Jack, Jr. hosted and walked his guests to numerous recharge features, which appeared as giant holes and voids in the ground in almost every direction. With that, protecting the land and these delicate water resources was an obvious choice for HCC. Thus began a three-year long process to negotiate a conservation easement on their 2,253acres, with diverse partners to include Hill Country Conservancy, the Natural Resources Conservation Service, the City of Austin and Hays County, the first partnership of its kind in Hays County.

Gay Dahlstrom further set herself apart because she not only wanted to protect her family’s land, but she also sought to someday allow limited public access to a portion of the ranch. During her later years, she expressed many times how critical the solitude and serenity provided by nature was to her well-being and spiritual life. She wanted to share that with others, and she felt the best way to do this was to offer others the opportunity to experience nature. (Note: This dream has not yet been fulfilled, but Mrs. Dahlstrom’s children are currently working with Hays County regarding the lease agreement which would make this vision of limited public access a reality. Until then, there is no public access on their private land.)

We join the Dahlstrom family in celebration of the life of Gay Ruby Dahlstrom and the legacy she has created for all of us in Central Texas as well as future generations of Texans. The Hill Country wouldn’t be the same without her.