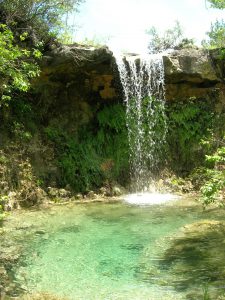 amed Texas folklorist J. Frank Dobie dedicated his life to telling the story of Texas by documenting its traditions, its legends and its lands.  In his day, he was considered the state’s leading literary and cultural figure. Much of his work was inspired by time spent on his beloved Texas Hill Country ranch near the burgeoning town of Spicewood. Enchanted by the land’s abundance of beautifully flowering escarpment black cherry trees which are endemic to the region and grow only near water, he aptly named the property Cherry Springs Ranch.

In 1958, Dobie sold the ranch to the Edwards family.  If Dobie were alive today, he would be proud to know that the Edwards family has worked to preserve, forever, the history and heritage of Cherry Springs Ranch through a conservation easement held by Hill Country Conservancy.

Straddling the Burnet and Blanco County lines, Cherry Springs Ranch is 1,038 acres of beautiful and varied landscapes ranging from dramatic cliffs to lushly vegetated grottos and sparkling creeks.  The land reveals glimpses of its historic and prehistoric past through dinosaur (sauropod) tracks and stone fragments of tools used by Native Americans.  Modern settlement of the area began in the mid-1800s as evidenced by the many rock wall remnants found on the property.  Such walls predominantly fell out of use with the invention of barbed wire in the 1880s. Since that time, the land’s usage has included livestock breeding as well as an array of agricultural crop production and, of course, a writer’s retreat.  In the early 2000s, the Edwards family repurposed the ranch for wildlife management. Today, diverse plant communities and extensive native wildlife thrive there as a testament to the family’s dedicated and conscientious land stewardship practices.  A recent land survey documented an expansive 77 individual species of birds on the property, including the federally endangered Golden-cheeked Warbler, the recently de-listed Black-Capped Vireo and 16 species listed on the Species of Greatest Conservation Need for Texas. 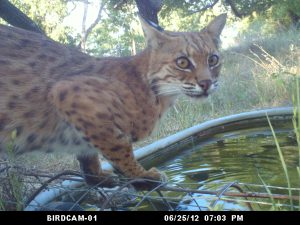 Cherry Springs Ranch is situated over three critical watersheds – the Lake Travis and Pedernales River watersheds, and boasts an impressive 37,640 linear feet of waterways including Sycamore Creek, Cypress Creek, Fall Creek and many natural springs. Because of the abundance of water sources and the location of the land, the Edwards’ choice to enter into a conservation easement with HCC will forever benefit current and future generations of Texans.  Permanent protection of this land ensures its waterways will remain pristine as they continuously flow into Lake Travis and the Colorado River, the primary water sources for millions living in downstream communities such as Austin, Bastrop, Smithville and others eastward to the Gulf of Mexico.  Additionally, the Cherry Springs Ranch Conservation Easement includes outdoor lighting provisions aimed to preserve the dark skies in which the Hill Country stars shine bright. 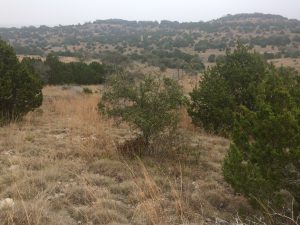