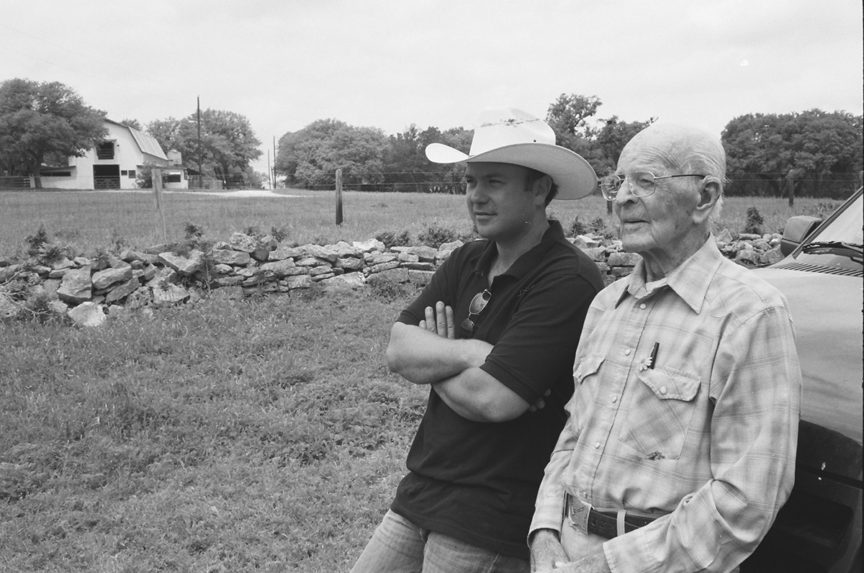 A Storm for the Ages

Just north of our village
There’s a man called Storm
It is known far and wide
That he has many charms.
His spread is real pretty
And we know not to ask
Just how many acres
Do you have in this patch?
The cattle are beauties
With polled horns and faces
They are lucky to be
In this finest of places
Go gather we round
For a big celebration
To wish Happy Birthday
To a man of great stature
He’s been rancher and banker and
Grandpa and dad
And community pillar
And holder of land
Since we’re all here together
Let’s give him a hand
We all need some rain
In this dry neighborhood
But in lieu of that rain
A Storm’s always good
Happy Birthday, Lynn 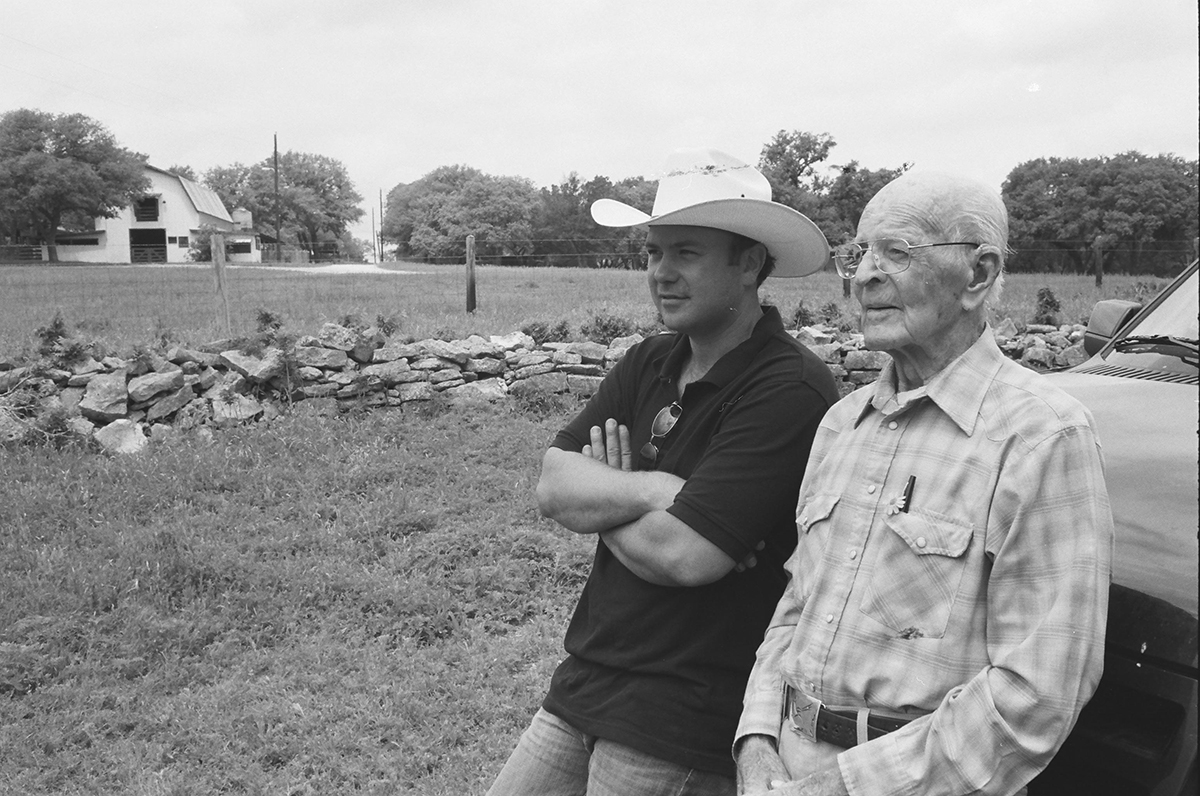 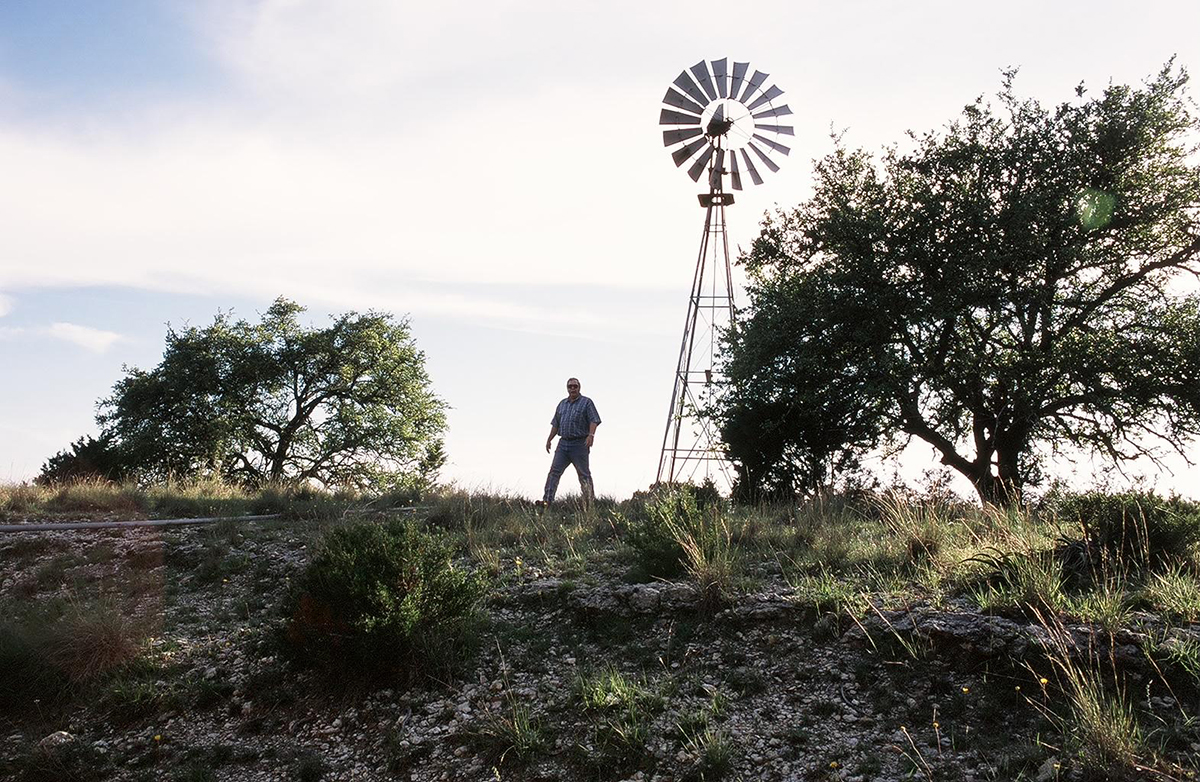 The Texas Hill Country has long been a region plagued by human struggle. Early Native Americans and the European settlers that followed were continually challenged by the harsh, unpredictable conditions in this area, but the majestic beauty of these hills, trees, springs, and streams have always been an irresistible draw to the Hill Country.

In the best years, rainfall has been abundant, rewarding those who worked the land with a proliferation of forage, crops, and cool, clean water for drinking and respite from the heat. In the worst of years, the surreal beauty of the Hill Country turns upside down and bites back. Grasses and wildflowers brown and wither, sometimes barely making an appearance for years on end. Springs, creeks, and wells dry up, leaving little water for swimming, drinking, wildlife, or agriculture. These struggles have driven many out of the Hill Country, but those who remain are familiar with struggle, and they know that the fight is worthwhile.

These days, local farmers and ranchers still fully acknowledge the challenges of our climate and natural world, but they are now also threatened by an entirely different type of struggle. The reach of the city center has now spread beyond the suburbs into more rural areas. Just as the early settlers did, newcomers have fallen in love with the charms of the untamed Hill Country, and they strive for a piece to call their own. With the best of intentions, they settle on their 5, 10, 25-acre ranchettes, often recreating the homes they left behind. Worse still, misguided efforts at land management by former urbanites sometimes do more harm than good.

The ultimate result is the fragmentation of larger ranches into smaller properties with reduced agricultural and wildlife viability. Excessive water is withdrawn for exotic lawns and domestic uses, ever increasing the pressure on already jeopardized groundwater supplies and streams. Soon, modern conveniences arrive to fill the void, including gas stations, restaurants, and hardware and grocery stores. Schools and fire stations must be built to provide community services in previously undeveloped areas. As it is often said, we are “loving the Hill Country to death”.

Of course, there are many obvious benefits to these changes. Development boosts the local economy. Growth is necessary and inevitable as our population increases, and we need quality housing for our families. However, as with any other endeavor, there are costs to pay. We know about the degradation of our natural resources and wildlife habitat that occur. In fact, it has been proven repeatedly that fragmentation, sprawl, and increased impervious cover are some of the primary threats to our water, wildlife habitat, and natural resources . None of this is new news, and many are growing evermore numb to the message of these doomsday reports.

But there are deeper moral and spiritual issues to consider. As “highest and best use” development values drive up property prices, the original stewards of these expansive, beautiful working lands are burdened with excessive property and estate taxes. The income from sustainable ranching and farming is little help in the battle to keep their land, and many are forced to sell or subdivide. As multi-generational landowners are driven out, and old ways of living and working the land are forgotten, we lose the unique heritage, character, and pride of the rural Hill Country. We lose our sense of place.

“The price of business does not add up to the income.”Lynn Storm, 2002

Sadly, this story is common throughout our nation, but it is especially prevalent today in the Hill Country. In fact, Hays County, the home to most of our regional aquifer’s recharge zone and contributing streams, is among the most rapidly fragmenting counties in Texas. This is a race against time for many landowners. They need help, and they need it now.

Lynn Storm was the ultimate embodiment of this struggle. After traveling all over the nation with his family in his younger years and studying at the University of Texas at Austin, he eventually settled in Hays County in 1950 with his wife Maxine, their daughters Lynette and Anne, and their son Scott, and he began his dream of ranching and caring for the land. As his Polled Hereford herd grew, so did the size of his holdings and his love for the land. His intelligence and drive soon yielded awards and recognition for notable achievements in livestock management and pasture design. In the 1960s, Lynn Storm served as president of the Texas Polled Hereford Association and was a delegate for the American Polled Hereford Association.

In 2005, after several years of negotiation, hard work, and fundraising, Phase I of a conservation easement was created to preserve a large portion of the natural beauty and heritage of the 5,700 family ranch. Lynn Storm and his family had found new hope, but there was still work to be done. Recently, HCC and the Storms completed the fourth “phase” of conservation easements on the ranch, now totaling over 4,400 acres of land.

Sadly, Lynn Storm passed a few years ago, but his family continues to strive to keep his legacy alive and preserve this unique Hill Country property for future generations.

“I’d really hate to see the springs and all the trees on the ranch torn up. After you live on a place all your life, a lot of it gets kind of special. People propose to people out there. They have all kinds of special spots where their kids go swimming. All the dogs are buried out there.”Scott Storm, Lynn's son, 2002

The Storm family is a common family, and their story is a common story. People are losing their family land every day, and the greater community suffers the loss of special places that cannot be replaced. So please do what you can now to help! Donate or volunteer. Educate yourself and educate others. Encourage sustainable growth. Experience the gifts that the Texas Hill Country has to offer. And for the sake of future generations, let’s leave it better than we found it. 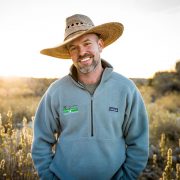