Stories of Rocks and Rivers

Indigenous relationships to the lands, waters, and wildlife of Central Texas

It was the summer of 2022 as I traveled to the home of Dr. Mario Garza and Maria Rocha, dear friends and mentors who serve as founding board members of the Indigenous Cultures Institute and elders of the Miakan-Garza Band of Coahuiltecans.  The goal of this meeting was to discuss projects of the Institute, where I am a contributor.  However, these trips often feel less like business and are more akin to pilgrimages to experience elder wisdom and to hear their stories.  Dr. Garza and Maria’s home sits in the Texas hill country outside the city of San Marcos and is tucked away in a forest of live-oak and cedar trees.  The season had experienced the most significant regional drought in over a decade, and the grasses had long turned crispy.  Among the points made by Maria on the weather conditions was how our species must act to protect the environment, not only for our own survival but because we are a part of the earth and have a responsibility to serve its needs.  During my decades of learning from the elders, I have come to recognize this philosophy as being central to their beliefs and practices.  Considerations of what we owe our communities and the world around us is at the heart of Indigenous ways of being, which is a lesson we should all consider in our dramatically changing environment. 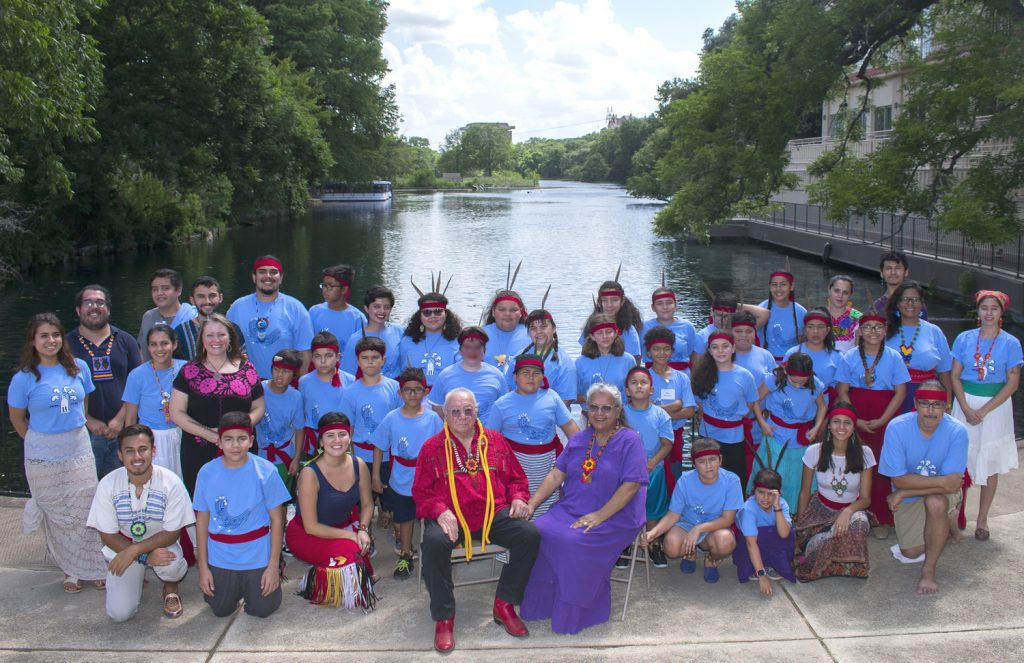 Native American culture in Central Texas is both vibrant and diverse, with individuals representing many different traditions.  There is a strong Intertribal culture of Cherokees, Chickasaws, Sioux, Blackfeet, and many other nations from across the continent.  There is also a significant population of detribalized Indigenous people, who through problematic histories of politics and racism, have lost their Native American identities over the past several centuries.  This includes over eleven million people in Texas who are Indigenous but who have been labeled as Hispanic or Latino.  However, there is a growing movement in these communities, including the Coahuiltecans, to reclaim their Indigenous heritage.  Their voices and stories of long-held connections with this land are critical to its future.

Conversations on Native American environmentalism are valuable, but they also face many pitfalls of misconception and assumption.  Non-Indigenous people often see us through New Age perspectives or cliches from old western movies that shaped the contemporary zeitgeist.  Vine Deloria Jr. of the Standing Rock Sioux wrote about how Native people are often seen through a lens of “primitive purity,” which emphasizes how perceptions of our authenticity often rely on us being stuck in time.  This can be seen in the old commercials of Iron Eyes Cody crying at litter or Disney’s Pocahontas dancing on the wind and speaking with trees.  The latter is an example of the blending of “primitive purity” with New Age naturalism.  There is great power in story, symbolism, and poetry, but the reality of our identities and connections with the land are far more complex than how we are typically portrayed.

Indigenous communities grow and develop over time, as is the right of all peoples of the world.  We aim to embrace the tools of modern society while maintaining our values, traditions, and cultures.  There is great variety across Indigenous people, and while it is important to avoid generalizations as if we were a single cultural block, I am confident in saying that a heightened responsibility to community and the environment are common Native characteristics.  Within Texas, there are a great many Indigenous environmental advocates, water protectors, and land stewards.  Our histories and communities tie us to natural spaces, and our stories can serve as powerful tools for their protection.

The lands of Central Texas have been home to many Indigenous people, but the Coahuiltecans are most connected with this corner of Turtle Island (North America).  Their creation story tells of how humans followed deer out from the underworld through the springs of Central Texas.  It is a story that applies symbolism and culture, but unlike many other works, it grew from history and authentic Indigenous voice.  This story is recounted in the award-winning play, Yana Wana’s Legend of the Bluebonnet, written by Maria Rocha and Roxanne Schroeder-Arce of the Indigenous Cultures Institute.

How such stories are told and who is telling them is an important consideration of responsible culture sharing.  I acknowledge that while I am Native American, Central Texas is not the homeland of my people.  I am Choctaw, who are from Oklahoma and then Mississippi, Louisiana, and Alabama prior to relocation.  However, I am proud to serve the Indigenous Cultures Institute, which is the nonprofit arm of the Miakan-Garza Band of Coahuiltecans.  I am not an expert on their culture, but I am a cousin and friend who tries to enter their spaces with respect and a willingness to learn. 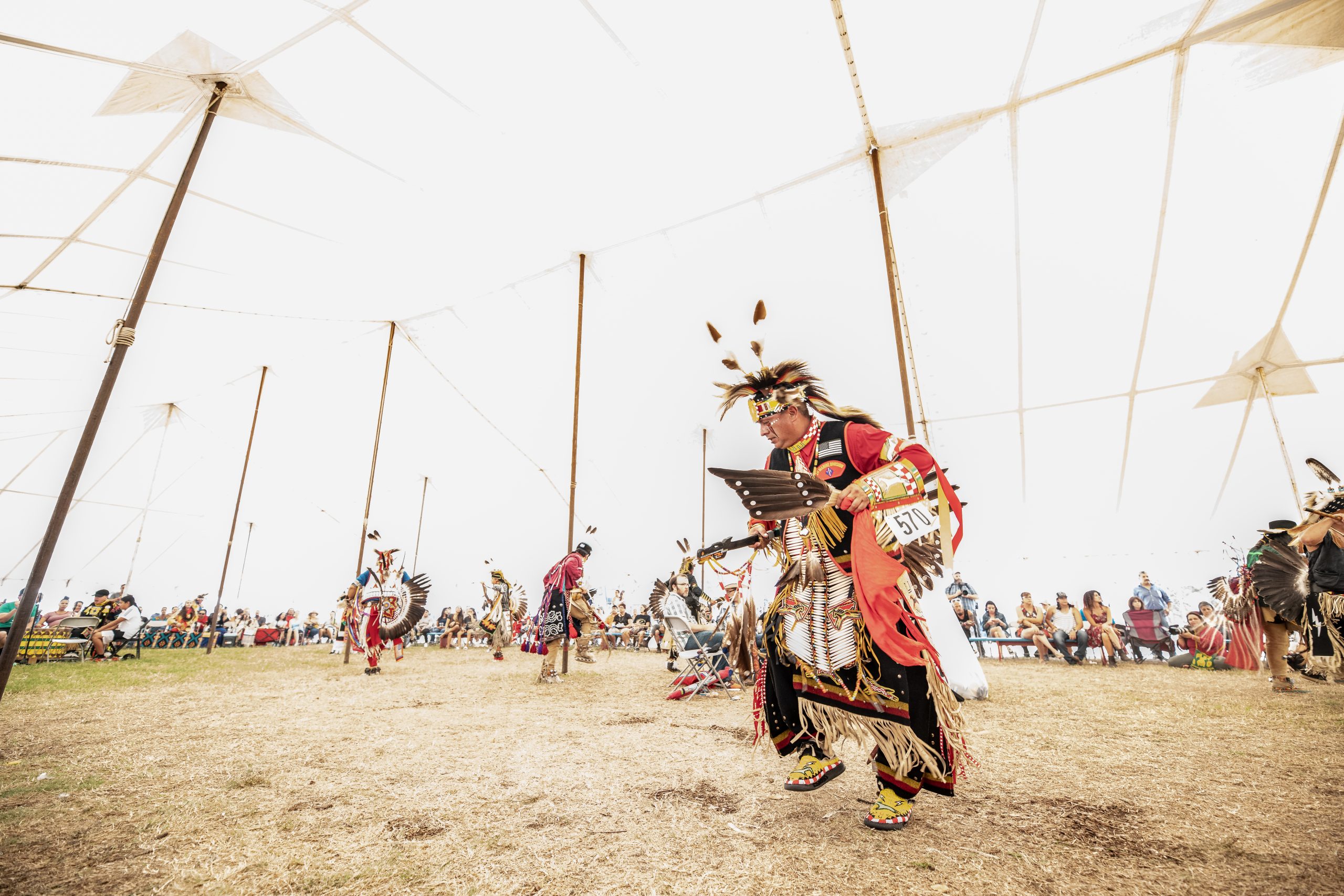 Dancers at the Sacred Springs Powwow.

The Indigenous Cultures Institute was founded in 2006 and has grown over the past two decades into one of the most active Native American communities in Texas.  Its work emphasizes education, culture, and environmental stewardship.  Among its programs are an Indigenous Arts Summer Encounter, with provides a week of free programming to San Marcos youth; a lecture series promoting Indigenous educators to libraries, schools, and cultural institutions; and the Sacred Springs Powwow, a large Native American festival set for October 1st and 2nd featuring music, dancing, arts, and foods from across Native America.  There are also several additional programs focused on the repatriation of Indigenous remains, Coahuiltecan language preservation, and the protection of sacred sites.  For a Choctaw far from Choctaw country, the Indigenous Cultures Institute has served as a powerful avenue to learn and take part in community.

A connection with nature has also served as an important part of my Indigenous identity.  While the wilderness is woven into the pre-mentioned cliches about Native identity and Deloria’s “primitive purity” critique, it is also true that our connection to land, water, and wildlife is important to Indigenous ways of being.  I grew up as a country kid roaming the green hills of the Choctaw reservation in southeastern Oklahoma.  My family moved to Central Texas in my early teen years, and I quickly grew to love the lands and waters of the region.  The forests of cedar and live oak carved by rivers and framed by limestone cliffs makes for one of the most distinct and beautiful natural regions on the continent.  I have spent countless hours roaming Lake Georgetown, Enchanted Rock, the San Marcos River, and Inks Lake, among others.  For a country kid living in the city, these are the spaces where I have most felt connected and inspired.

There is perhaps no natural space I have hiked more than the San Gabriel River Valley upstream from the city of Georgetown, Texas.  My family home sits on the neighborhood above a limestone cliff carved by the river, and this natural barrier long made it difficult for the wider population to access the valley.  It therefore remained for several years as a beautiful and unspoiled example of Central Texas wilderness.  It is where I had my first kiss, where I learned to play the harmonica, and it is where I would hide from the world when stress or depression would hold down my spirit.  The San Gabriel River valley has been a source of peace and imagination for decades.  It is my church.  It is therefore sad to say that the past few years have seen the valley’s forest bulldozed to make way for a new neighborhood.

Part of living in Central Texas is occasionally having your heart broken by development.  Austin is a boom city, and bulldozers are an unavoidable consequence of that reality.  We must contend not only with development but also our changing world.  From the burning of Lost Pines in Bastrop to the challenges of our aquifers, too many of our treasures have been lost or are struggling.  Unfortunately, the reality of climate change and development patterns is that more loss is coming.

However, the struggle is not over.  There are good people doing good work in the world of environmental advocacy.  Indigenous voice can serve as a powerful supplement to these efforts, and the contributions of the Coahuiltecans can make a meaningful impact in Central Texas.  Their blood is interwoven with the land, and their culture provides important examples of what can be accomplished through respect and responsibility.

Humans are storytelling creatures.  Stories are how we make meaning in the world and assign value to action.  Scientific analysis is critical to environmental advocacy, and the expertise of biologists, geographers, hydrologists, and others needs to be emphasized.  However, conversations about relationships, responsibility, and spirituality also have great power.  These stories inspire the masses in ways that statistics and research are unable to accomplish on their own.  The two approaches must be combined to propel both the logical and intuitive sides of our nature towards action.

Our shared future presents great challenges and great opportunities.  How we move through the next century will depend on the strength of our relationships, respect for traditions, and teaching reciprocity with the natural world to our youth.  Indigenous voice has a role to play in this work.  Through tireless effort and strong friendships, I have hope that these stories will be shared in a meaningful way.

Aaron is a member of the Choctaw Nation of Oklahoma and an active contributor to the Central Texas Indigenous community. He is a member of the Four Winds Intertribal Society, he serves on the Indigenous Cultures Institute’s Board of Elders, and he is Associate Coordinator of the Sacred Springs Powwow in San Marcos, TX. Aaron also serves as a financial officer with the University of Texas at Austin’s Butler School of Music. As a Native American flute player, he has performed at the Alamo, the Bob Bullock Texas State History Museum, The Austin Powwow, and numerous educational institutions across the state. Aaron holds a doctoral degree in Educational Leadership and Policy from the University of Texas at Austin where his research focused on Indigenous community building in higher education settings.